What does the CIGS technology mean in the solar tiles?

Advantages and explanation of the CIGS photovoltaic (PV) solar panels

Solar solutions from Tejas Borja, where the PV solar tiles are integrated in the ceramic roof in a way such that their impact on the original design is the least, present many more advantages aside from the aesthetic aspect.

Energy self-consumption consists of generating energy in the place where it is consumed or close to it. This is achieved through the construction of an electric generation installation which covers the own electric energy consumption and also allows to save on electricity bills. The choice of material for the roof is decisive to guarantee the durability, watertightness, protection and energy efficiency of the home. Without losing sight of the aesthetic aspect of it, we always look for an optimized design according to the function that it has to fulfill. The integration is obtained by using ceramic tiles as a construction element to cover the inclined roofs.

With minimal visual impact from the solar panels and easy installation, TEJAS BORJA achieves the perfect architectural integration. The SOLAR tiles from Tejas Borja are manufactured to hide the solar panels to such an extent that they go unnoticed. Without the typical silver connections that we see in most photovoltaic products. With the same overlaps and fittings as the base tile, it provides durability and maximum watertightness.

In addition to the architectural integration of the solar tile in the original project, it is important to consider another series of aspects. The technology used in solar panels and advances in this regard offer us alternatives that seek improvements in efficiency, design and even in their environmental impact.

The solar panel technology used in the SOLARES tiles from Tejas Borja is: Solar FLAT-5XL Monocrystalline and Solar FLAT-10 CIGS.

The term monocrystalline (monocrystalline silicon or “c-Si”) is well known in conventional photovoltaic panels, but what is CIGS technology? We explain below its outstanding advantages. 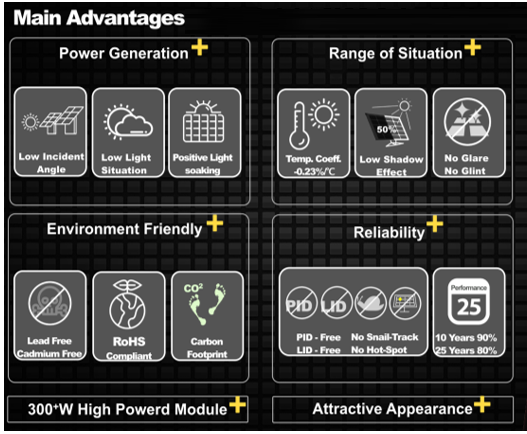 Another aspect for which to use TEJAS BORJA FLAT10 CIGS solar roof tiles is their zero net impact on the environment and their harmlessness for human health:

On the one hand, the carbon footprint during the entire life cycle of photovoltaic cells in general and of thin-film cells more specifically, is much lower than that of conventional electricity generation technologies. Although it is considered that the carbon consumption of thin-film cells (including CIGS) is less than that of silicon cells because large amounts of heat and therefore energy are required in the production of the latter. However, fine cell photovoltaic cells have traditionally had the drawback of incorporating toxic compounds, both for human health and for the environment. It is the case of the most widely used cadmium telluride (CdTe) cells, where the Cadmium is the main potentially toxic component, or as in some types of CIGS technology thin-film cells that incorporate cadmium sulfide (CdS) in their structure, which also makes them potentially toxic. Cadmium, with regard to human health, is a toxic element for the kidneys, bone and respiratory system as well as being classified as a carcinogenic substance.

In TEJAS BORJA’s CIGS FLAT10 solar roof tiles, not only cadmium compounds have been eliminated, but also lead, widely present in c-Si cells and which affects the nervous, hematological, gastrointestinal, cardiovascular and renal systems, converting it into in a 100% non-toxic technology. It also has the RoHS certification that guarantees compliance with Directive 2011/65/EU of the European Union on restrictions on the use of certain hazardous substances in electrical and electronic equipment.

By not incorporating toxic substances, the TEJAS BORJA FLAT10 CIGS solar tile can be fully recycled. For this reason and because the carbon footprint caused during their production is largely offset by the clean energy they generate throughout their useful life, it can be concluded that these tiles are 100% respectful with the environment and people’s health.

Description of the phenomenon

The power generated by a PV panel depends largely on the incident solar irradiation, as can be inferred from its P-V graphs. Likewise, in the event of partial shading, the shaded cells are polarized in reverse, so that a large part of the energy generated by the PV panel is evacuated as heat in said cells. This phenomenon also occurs in CIGS technology PV panels (Solar FLAT10 tile technology) and is much less pronounced than in c-Si or poly-Si technology panels (monocrystalline and polycrystalline). In the following image it can be seen how in the CIGS PV panels of TEJAS BORJA (Solar Flat10 tile) the energy generated when the panel is shaded decays to a much lesser degree than in the c-Si panels.

With TEJAS BORJA’s CIGS solar tiles, it is not necessary to use microinverters or individual MPPT optimizers connected to each PV panel. This is especially attractive in integrated photovoltaic systems on roofs with a good number of obstacles such as chimneys, antennas, etc. in which partial shadows are expected at certain times of the day.

For all these reasons, TEJAS BORJA’s CIGS solar roof tiles are postulated as the best candidate to be integrated into the photovoltaic system of those locations where it is not possible to avoid partial shading of the PV modules, since it is the most effective in terms of shading, in addition to being more sustainable because it does not contain heavy metals.

Appearance of small fissures or cracks in the PV cells (specifically in the semiconductor material), of varied casuistry, which lead to a decrease in the performance of the same and, therefore, of the PV panel as a whole, and may even cause the reduction of its useful life.

On the one hand, the decrease in performance is specified in a lower generated power due to the electrical discontinuity caused by the micro-crack (of the semiconductor material itself, of the current collectors, of the welds…). On the other hand, the formation of discontinuities in the cell (which present a greater electrical resistance) can lead to the appearance of hot spots (heat dissipation in the zone of high electrical resistance), with the consequent degradation of the cell and, therefore, hence, from the PV panel.

It is practically impossible to guarantee that throughout the “life cycle” of a PV panel, from the time the sheets of semiconductor material are formed and their different “layers” are assembled in the manufacturing process, until reaching the end of its useful life (about 20-25 years), these micro-cracks will not appear. During the manufacturing phase, it is essential that the manufacturing company implement procedures that guarantee the correct handling, assembly and displacement of the modules in order to avoid the appearance of the aforementioned micro-cracks.

Likewise, it is decisive that, after finishing the manufacturing process, said panels are packaged, stored and transported/distributed in an appropriate manner, avoiding as far as possible sudden changes in temperature and crashing.

On the other hand, during the installation phase, the installation company must guarantee that the panels will be properly handled throughout the process: movement of panels and installation personnel, fastening of panels to structures, connection, etc. This is another of the critical points when it comes to avoiding the appearance of micro-cracks in the PV panel.

Due to the small size of the PV panels perfectly integrated into the TEJAS BORJA roof tiles, the chances of microcracks appearing are considerably reduced. On the one hand, its handling is easier, as is its installation, avoiding the panel buckling or hitting and, even in the event of a hit, the panel is integrated into a metal or ceramic structure, so the impact is absorbed by said structure. Likewise, as it is installed sequentially along the roof and does not require mechanical installation operations, it prevents the operator from stepping on or hitting the panel during said operations.

It becomes evident that after receiving a conventional PV panel at the facilities where it is to be installed, it may present a non-negligible number of failures that affect its useful life and performance.

Description of the phenomenon

The phenomenon of the “hot spot” consists of excessive overheating of part of the PV panel, causing its eventual deterioration and even (very unlikely) combustion.

When the PV panel is partially shaded or an object/defect completely blocks the incidence of solar radiation (such as a leaf, dust, a blow to the front panel, microcracks in the semiconductor material, etc.), those affected PV cells may become reverse biased. This means that the cell begins to behave, in part, as a resistance that dissipates, in the form of heat, part of the electrical energy generated by the rest of the PV cells, with the consequent increase in temperature of the affected PV panel area. The energy dissipated in the shaded cell will be as larger as it was the difference in solar irradiation with respect to the rest of the PV cells. This phenomenon could be avoided by associating a bypass diode in parallel to each PV cell, which, in practice, is only carried out by sets of PV cells associated in series, with which the phenomenon is avoided to a certain degree, but it is not eliminated.

The hot-spot phenomenon is especially pronounced in traditional technology PV modules, such as c-Si or poly-Si (Crystalline Technology). In thin film technology PV panels and, more specifically, in CIGS panels, the effect of the hot-spot and the risks associated with it, such as the combustion of the module itself, disappear, since the shading partial blockage of part of the module, or even the total blockage of part of it, hardly suppose a slight increase in temperature. In the case at hand, TEJAS BORJA has carried out the most exhaustive experiments to confirm and verify this fact, whose description and most notable results are presented below:

On the other hand, it should be noted that TEJAS BORJA’s FLAT-5XL solar roof tiles are made up of a ceramic tile specially designed to integrate the PV panel and the ceramic tile is inherently fireproof. 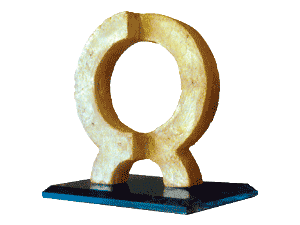 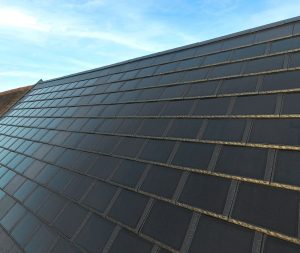 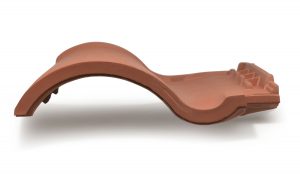 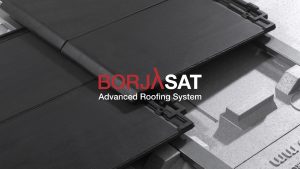 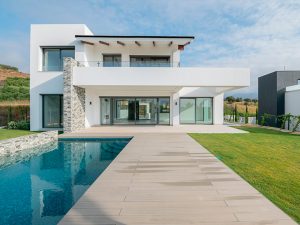 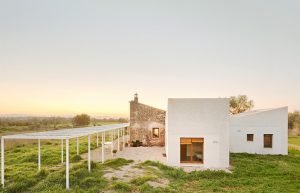 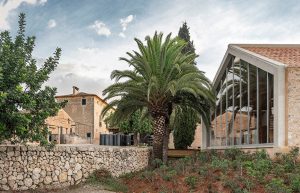 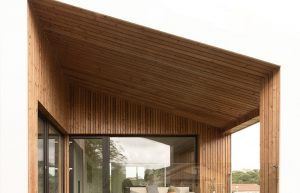 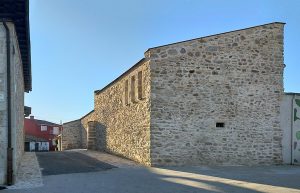